Rijeka's beach Ploče located below the new pool complex Kantrida was awarded in Dubrovnik as the best beach in the project "Tourist Flower - Quality for Croatia 2012". Ploče was named the best in the category of urban/local beaches, in the project organized by the Croatian Chamber of Economy.

Research of quality was conducted by the Institute of Social Sciences Ivo Pilar from Zagreb, and all events were monitored through HTV (Croatian national television) show "Colors of tourism". The award for Ploče beach was accepted by the mayor of Rijeka Mr. Vojko Obersnel. 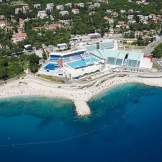