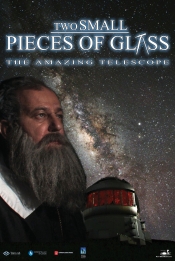 During the summer months, Astronomical Centre Rijeka prepared a special program for foreign tourists that will be visiting Rijeka and its surroundings.

Foreign tourists may enjoy unique experience of digital planetarium by watching a film in English language every Wednesday at 8.30 pm in the period from June 15 to September 15, 2016.

This year's film for the foreign visitors is Two Small Pieces of Glass, 30-minutes documentary about the telescopes and significant discoveries these tools have made throughout the history of astronomy.

For the young and wider public, this film explores the Galilean moons, Saturn's rings, spiral structure of galaxies, how does a telescope work, how do the large observatories in the world use these instruments to explore the mysteries of the universe. Soundtrack is performed by the renowned London Symphony Orchestra.

For groups larger than 8 people, it is possible to organize a special projection and they can choose between 10 films dubbed in foreign languages, in German, English, French, Russian, Spanish and Italian.

More about the mentioned films