Show Christmas at the planetarium during December at Astronomical Centre Rijeka 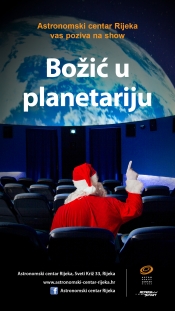 Like every year in December, Astronomical Centre Rijeka prepared show Christmas at the planetarium.

During the mentioned show the audience learn about stars that can be seen from Rijeka at Christmas time, details about Christmas star (the Star of Bethlehem), about three wise men and what they saw in the sky  when Jesus was born, what did the sky look like at the presumed time of Christ's birth.

In 35-minute show, popularizers of astronomy educate the visitors so they could observe celestial objects and phenomenon by giving a scientific explanation of those possible events.