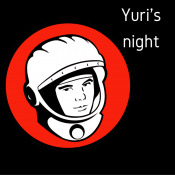 On the occasion of Yuri's night, event dedicated to the space exploration, Astronomical Centre Rijeka prepared a short show about the first manned flight to Space and it will be shown on Tuesday, April 12, 2017, before the regular program.

Also on April 13 begins Holidays at Astronomical Centre Rijeka by showing the film From Earth to the Universe at 5 pm.

Therefore in the second week of April, from 11 to 15, digital planetarium will be showing the following program:

About Yuri's night
Yuri’s Night is a global celebration of humanity’s past, present, and future in space. Yuri’s Night parties and events are held around the world every April in commemoration of Yuri Gagarin becoming the first human to venture into space on April 12, 1961.
At digital planetarium vistor will watch the short show about the flight.

From Earth to the Universe
From Earth to the Universe leaves our home to take the audience out to the colourful birthplaces and burial grounds of stars, and still further out, beyond the Milky Way, to the unimaginable immensity of a myriad galaxies. Along the way, the audience will learn about the history of astronomy, the invention of the telescope, and today’s giant telescopes that allow us continue to probe ever deeper into the Universe.
The mentioned film will be shown on a week days at 5 pm.
Croatian version is dubbed and the voice actor for this film is famous singer Mia Negovetić.