Among many organized groups that visited Astronomical Centre Rijeka during May, there were fourth grade pupils of Elementary school Špansko Oranice from Zagreb.

These active scholars and their teachers collected money for making recognizable t-shirts by organizing enviromrntal event. That group was also special because of their interest for astronomical facts; after watching the film in digital planetarium Back to the Moon: For Good, they had numerous questions during the lecture on the Solar System held by Academic Astronomical Society - Rijeka. 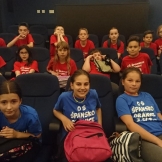 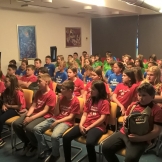