World famous swimmers, members of US national swimming team, have choosen Swimming Pool Kantrida for the second time for their training camp before the World Championships that takes place in Budapest from July 14 to 30, 2017.

Swimmers trained at Swimming Pools Kantrida from July 12 to 19, 2017, at both Olympic pools, indoor and outdoor, as well as at Diving pool. For the best results for all the 45 swimmers take care 25 members of staff (coaches, nutritionist, psychologists, doctors).

On Saturday, July 15, at the complex was organized a media day and open training session so the press could interview the swimmers and so the youngest members of the local sport clubs could watch their idols during the practice.

On the press conference were present Francis Busch, director of the US national swimming team, Vojko Obersnel, Mayor of the City of Rijeka, Vera Begić Blečić, head of the department of sport and technical culture of the City of Rijeka and Zlatan Hreljac, director of Rijeka sport Ltd. World famous athletes who attended the conference were Katie Ledecky, Matt Grevers, Elizabeth Biesel, Nathan Adrian and Ryan Murphy.

Director of the US national swimming team, Francis Busch will retire after the World Championships Budapest 2017, so training camp in Rijeka was his last one.
At the conference, director Busch said:
"The first time, it was amazing, but now it's even better. This place is beautiful and we are honored to be here. I want to thank our host who fulfilled all of our requests and I wonder why every national team don't come in Rijeka for a training camp. I am a little emotional because of my leave, but I am sure our swimmers even after my retirement, whenever there is an important competition in Europe, they will come for a camp at Swimming Pools Kantrida."

About the swimmers (source: Wikipedia):

Katie Ledecky is a five-time Olympic gold medalist and nine-time world champion. She is the current world-record holder in the women's 400-, 800-, and 1,500-meter freestyle (long course). She also holds the fastest-ever times in the women's 500-, 1000-, and 1,650-yard freestyle events.
In her international debut at the 2012 London Olympic Games as a 15-year-old upstart, Ledecky unexpectedly won the gold medal in the women's 800-meter freestyle. Four years later, she left Rio de Janeiro as the most decorated female athlete of the 2016 Olympic Games with four gold medals, one silver medal, and two world records. In total, she has won 20 medals (19 golds and one silver) in major international competitions, spanning the Summer Olympics, World Championships, and Pan Pacific Championships. During her career, she has broken thirteen world records.

Elizabeth Biesel placed second in the 400m individual medley at the 2016 US Olympic Swimming Trials, qualifying for her third Olympic team. She has won a total of nine medals in major international competition, four gold, one silver, and four bronze spanning the Olympics, World Aquatics, and the Pan Pacific championships.

Matt Grevers is a six-time Olympic medalist. He has won a total of thirty-three medals in major international competition, fourteen gold, twelve silver, and seven bronze spanning the Olympics, World Championships, and the Universiade. 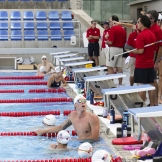 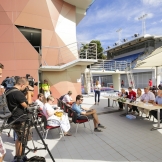 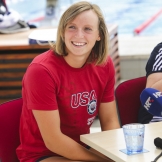 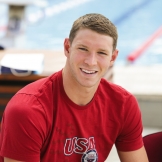 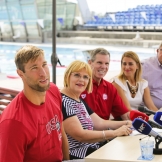 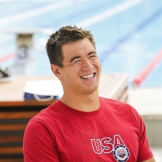 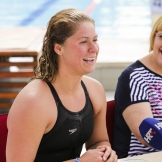 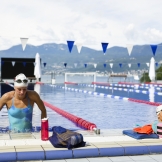 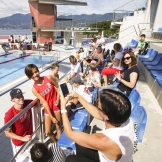 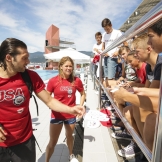