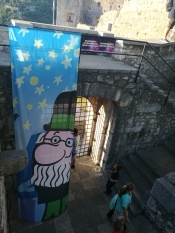 The only Centre in Croatia during the event presented its programs at digital planetarium and observatory as well as the possibilities for school visits, seminars, lectures and educations in the Centre's spaces.

Among the participants of the event were also students of the Department of Physics of University of Rijeka, Jadran galenski laboratorij, Association of biotechnology students Rijeka, Land of fun and animation from Pula, World of Math, Foliot - Centre for children and youth and Academic astronomical society Rijeka. The program included lectures, presentations and experiments in order to make the science more popular.

This year's event was held for the third time as a part of the greater event, Ljeto na Gradini (Summer at Gradina).