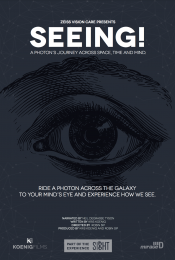 During the summer Astronomical Centre Rijeka will be showing a program for foreign tourists in English language in digital planetarium. From June 19 to September 11, 2019, on Wednesdays at 8 pm the visitors can watch a film SEEING! A Photon's Journey Across Space, Time and Mind.
For group of visitors larger than 8 people who want to see another film in a different language it is necessary to make an appointment via e-mail astronomski-centar-rijeka@rijekasport.hr or tel. 00385 51 455 700.

The narrator in the film is famous American astrophysicist, author, and science communicator Neil deGrasse Tyson.

SEEING: A Photon’s Journey Across Space and Mind is a 27-minute full-immersion planetarium program, which uses hemispheric animations and video to teach how human vision works. Imagery from all over the world including humanity, landscapes, skyscapes, wildlife and of space are the backdrop for photo-realistic animations to create the story of a photon’s journey from the belly of a star, across the galaxy, to a young stargazer’s eye.