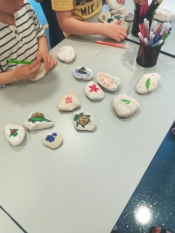 In June, Astronomical Centre Rijeka organized a special workshop for children on the occasion of World Oceans Day and prepared a program to participate in city's events, Festival of the sea/Fiumare and St. Vitus days.

Program for Festival of the sea included different shows and films at the planetarium as well as workshops dedicated to navigation, astronautics and stargazing.

World Oceans Day program started with a short lecture about sea turtles. The participants, children aged 4 to 10, used the knowledge about the turtles to paint on pebbles along with their parents. The program dedicated to endangered animals and preservation of the oceans continued at the digital planetarium, with the film Kaluoka'hina, The Enchanted Reef.

St. Vitus days lasted for three days and along with the additional program at digital planetarium, visitors could learn more about the telescope in a short presentation before stargazing at the observatory. 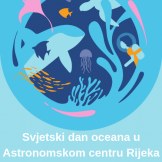