Premiere of the new film Dinosaurs at Dusk took place on Thursday, September 5, 2019, at 10 am at Astronomical Centre Rijeka.

The guests at the premiere were Mayor of the City of Rijeka, Mr. Vojko Obersnel with asociates, and CEO of Rijeka sport Ltd, company that manages Astronomical Centre Rijeka, Mr. Igor Butorac, cities' institutions' representatives and voice actors in the Croatian version of the film Sandro Bastiančić, Matko Margan, Lorena Vulić i Sandra Bastiančić.

Mr Butorac greeted the guests and thanked everybody included into realization of this film, thirtheenth for the Astronomical Centre Rijeka.

Also the citizens were invited to contact the Centre to book their seats for the first showing of the film that would be free of charge.

The film would be shown during September according to the schedule: on Wednesdays at 6.30 pm, Thursdays and Saturdays at 7.30 pm.

Film was created by Mirage 3D, written & directed by Robin Sip. Soundtrack is composed by British composer Mark Slater and performed by the Prague Metropolitan Philharmonic Orchestra and the Prague Chamber Choir.

"Dinosaurs at Dusk", a whirlwind time travel adventure back to the epoch of the Dinosaurs.

Lucy and her father fly through the Triassic, Jurassic and Cretaceous to soar with Quetzacoatlus, escape from raptors and ride behind Argentinosaurus.

"Dinosaurs at Dusk" has to be the most kinetic planetarium show ever produced. This program will make you want to flee outside at a full sprint and scale a cliff just so that you can slap on a wing suit and base jump off it.

About 45 minutes in length, two protagonists soar through wide open canyons; sail over tumultuous oceans; hike through tropical rain forests, climb large ice cliffs, parachute into vast sink holes; all the while chasing, and sometimes running away from, all manner of Dinosaurs. 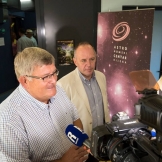 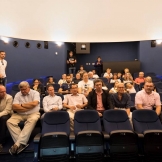 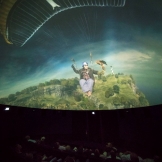