Reperesentatives of the city of Dalian visiting Astronomical Centre Rijeka

As part of the visit to the City of Rijeka, representatives of the city of Dalian from the Republic of China had a tour of the Astronomical Center Rijeka on November 13, 2019. At the Centre they were presented programs, specialties and the facility itself. At the end of their visit, they watched a film From Earth to the Universe in Chinese language.

Dalian is the most dynamic Chinese city, the most southeastern port of Northeast China with huge development opportunities. It is also a university, cultural and industrial hub, and is especially known for developing tourism. On April 27, 2006, an Agreement for the Establishment of a Friendly Cooperation between City of Dalian and City of Rijeka was concluded in Dalian. 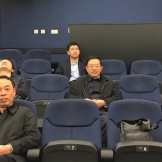