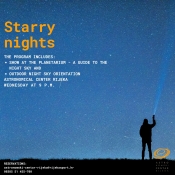 From mid-June (June 10, 2020) to mid-September (September 19, 2020), Astronomical Center Rijeka will offer a program for foreign tourists in English. Program will be offering in regular citizenship monthly program and will starting at 9 p.m. every Wednesday.

Program for forings will begin this Wednesday, June 10, 2020, as a NEW PACKAGE PROGRAM "Starry Nights" which will include the film for digital planetarium Touching the Ege of the Universe (45 minutes), followed by the laser program Night Sky Star Gas (30 minutes). The program is intended for people over 11 years of age.

The film Touching the Ege of the Universe is a documentary and educational film of the European Space Agency (ESA) about space telescopes. During the film, we will learn more about the sophisticated artificial satellites launched into Space and the discoveries that allowed us to better understand the world around us. The film gives us the answer why we send telescopes into Space, how they work. Also, the film will explain which forms of light are studied through the Planck and Herschel space telescopes, what the constellations of Orion look like, and why the Orion Nebula is of interest to scientists for observations. Also, the film will show how new stars are formed and what their lifespan is.

It will be found out that in the Universe, in addition to visible light, there is a whole range of electromagnetic radiation such as infrared light, X-rays, gamma radiation, ultraviolet radiation, etc. These radiations are important for us to better understand the process in Space, consisted of the early Universe and how it functioned.

After the film in the digital planetarium, the program will continue with a laser program lasting 30 minutes in park Sv. Križ, located next to the Center. Laer show is in English and it´s called Laser Night Sky Star Gazing. This astronomers expert guidance will explain the beauties of the Universe and the starry sky with the help of lasers. They will show with laser visible constellations, stars, planets, etc. Also, the program will include the topic of light pollution.

Regular program is in Croatian language.
For group of visitors larger than 8 people who wish to see a film in another language, it is necessary to make an appointment via e-mail astronomski-centar-rijeka@rijekasport.hr(link sends e-mail) or tel. 00385 51 455 700.

Special temporary conditions for visits to the Astronomical Center Rijeka:

the working hours of the Astronomical Center Rijeka for visits are from Tuesday to Saturday from 8 am to 10 pm according to the weekly schedule
the planetarium is open in the afternoon and evening from Tuesday to Saturday, and the coffee bar from 8 am to 10 pm from Monday to Sunday
in the space of the digital planetarium can accommodate a maximum of 15 visitors at a time, large halls 20 and multimedia halls 9 visitors, with mandatory maintenance of a distance of at least 1.5 meters
for organized groups of 8 people and more it is possible to organize a film and / or show in another term and in different foreign languages ​​with prior notice
upon entering the premises of the Center it is necessary to disinfect hands and shoes with secured means
visitors are advised to wear masks and other mouth and nose covers
individual entrance to the ticket sales area is allowed
visitors are kindly asked to prepare the exact amount of money when purchasing tickets
visitors are asked to touch surfaces, exhibits, exhibits, etc. as little as possible
the above special temporary conditions apply from 20 May 2020 until further notice, all according to the recommendations of the CNIPH
for all information related to the planetarium and Rijeka sport programs it is necessary to contact from Tuesday to Saturday from 2 pm to 5 pm