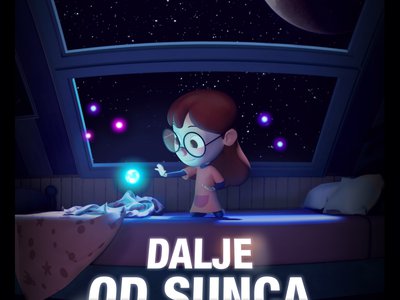 Celeste is fighting off sleep by reading a book on astronomy when, through her bedroom window, she receives a visit from MOON and his mischievous helpers.
Moon calls his helpers to order and then turns to Celeste to ask her if she likes to look at the sky. Celeste brags that she knows all the planets. The specks of light laugh and Moon clarifies to her that she knows all the planets that orbit one star, the Sun, but that there are many, many more stars in the universe.
And those stars also have planets? asks Celeste. Exoplanets, corrects Moon, that is what we call the planets that orbit other stars. Would you like to explore them?
With the aid of his helpers, Moon leads Celeste on a journey through the universe to discover what an exoplanet is and how it can be detected. Together they observe rogue planets, oceanic worlds, and super-Earths. Moon tells her about exoplanet hunters, astrophysicists who, from different points on the planet, observe the sky in search of a planet like Earth.
A new Earth! Celeste is excited. Out there, says Moon, there may be a star like our Sun, and orbiting around it, at the same distance as the Earth, a planet that has oceans, jungles, and – who knows? – civilizations.
Celeste is ready to go look for it right away, but Moon reminds her that she needs to get some rest first. Before she falls asleep, Celeste asks Moon if he will come back to visit her again. Do you like whales? Moon asks the girl. I love them! responds Celeste, and she drops off to sleep.
Then we will see other again soon, promises Moon, before leaving with his helpers.

Celeste - This restless and curious eight-year-old girl is fascinated by anything and everything. Her room clearly displays her hobbies and interests, with its mix of science books, dinosaur models, archeological tools, and planetary systems. It’s always been hard to get Celeste to go to bed. Until now. Because since she met Moon, Celeste eagerly awaits a visit from him and his rascally helpers. Together with them, she lives grand and amazing adventures. She wants to learn so many things!

Moon - Moon is a luminous body, perhaps a star, or maybe a being from space. But above all, Moon is light and knowledge. He has found the perfect student in Celeste. He values her curiosity and desire to learn and so he prepares fascinating journeys for her. Moon is aided by his little helpers, although their hijinks often annoy him. Sometimes Moon gets redder and redder until something small explodes inside him.

Helpers - Moon’s helpers are mischievous and playful little specks of light. They do not speak, nor do they have Moon’s wisdom, but he relies on them a lot to help him explain things. The problem is that sometimes they get distracted. And that is because playing, nosing around, and having fun is what they like most. Apart from helping Moon and visiting Celeste, of course.