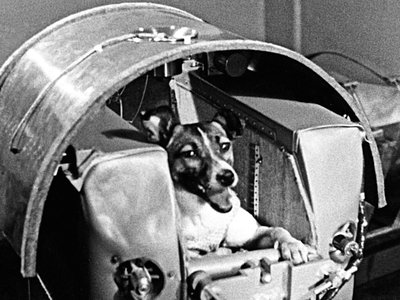 The new live planetarium show THE FIRST SPACE EXPLORERS is dedicated to cosmonauts / astronauts who were among the first to soar into space. The launch into Earth orbit of the first artificial satellite Sputnik 1 signed the beginning of space exploration: it was followed by Sputnik 2 (a dog called Laika was selected to be the occupant of the spacecraft) and Vostok 1 - the first flight of man into outer space with cosmonaut Yuri Gagarin. After those we will find out more about other Soviet cosmonaut piooners, among them the first woman and the first "walker" in space, and the first American astronauts to step on the surface of the Moon. This planetarium live show aims to present the importance of pioneer space explorers. All of them were lovers of heights: they loved parachuting, flying with sports and military planes and their dream was to soar into space. They will (certainly) remain eternal heroes in our hearts. In this presentation, we will meet these brave people - astronauts / cosmonauts, but also all those without whom these flights would not be possible.