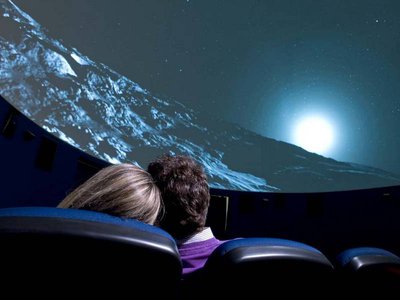 At the very heart of the Astronomical Centre, which is comprised of an observatory, a small and a large hall and additional facilities, is a digital planetarium. In order to explain it better, we will compare it to the observatory – whereas in the observatory the visitors can observe a real image of the space via telescope, the planetarium uses digital technology in order to display a simulated picture of the universe.

The digital planetarium in Rijeka is the only one of its kind in Croatia and the wider region. It is a hall in form of an amphitheatre, providing 50 seats and 2 additional seats for persons with limited mobility. Once comfortably seated, visitors can enjoy projections (live presentations) of the skyline and celestial objects or watch films on astrology and underwater world, which are displayed on an 8 m diameter dome above their heads.

The digital In Space System (RSA Cosmos) in combination with the Dolby Surround sound system will make your visit to the planetarium a memorable experience.

We invite you to visit the digital planetarium and learn more about its technology and how it works.

Due to digital projectors and special PC installations visitors can enjoy:

Film projections in the digital planetarium are new not only on the Croatian market but also abroad. All films are synchronized into Croatian language. The voices usually derive from famous Croatian actors and radio announcers. Depending on the production, some films are also provided in foreign languages, and thus usually in English, Italian or French. The scope of the film projections is to educate and entertain the wider public. Apart from the regular film program, the visitors can also choose from our special film collection.

Presentations/shows are programs which include professional guidance. Presentations on various topics are shown with use of the digital technology on the dome above spectator’s heads. In interaction with the public, professionals provide direct explanations on different appearances and phenomena. They represent a real titbit for the visitors who have the opportunity to get all the information they want immediately on the spot. It is a direct conversation that gives a feeling of travelling through the Universe to all the present. The presentations are tailored for different target groups: preschool children, elementary school children and high-school students, general public and other. Live presentations are shown according to the regular program or by an appointment.

The real picture of the universe provided by the observatory telescopes

This is particularly useful when observing attractive astronomical occurrences, such as Solar or Moon eclipse, meteor showers or movements of celestial objects. Apart from the Sun and the Moon, visitors can observe 118.000 stars, the Sun, the Moon and other planets and occurrences in the sky. They can also see numerous photographs or watch films.  Projectors can be used to observe the night sky at any time of night and from any point on the Earth.

The digital planetarium can be used for lectures, concerts and the like.

Planetarium is a New Latin word for a device that depicted the positions and the motion of the planets around the Sun. Today this word is used for theatres with a brightly coloured dome onto which a complete image of the night sky is projected by digital projectors. The main purpose of the planetarium is to educate and make astronomy and related fields more popular, but it can also be used as a lecture hall and a venue for various events.

The oldest mechanism used for displaying (i.e. calculating) positions of objects in the sky was found on the Greek island of Antikyteri and it is believed to date back to 150 – 100 BC. In the middle of the 18th century, first domed theatres and projectors for displaying stars and planets were built.

Modern planetarium projectors were first constructed and built by Carl Zeiss in 1924 in Germany. Traditional electromechanical/optical projectors were made of a hollow ball with a light inside and a pinhole for each star ("star ball"). The light was projected through the pinholes on the dome screen and the dots presented stars of various sizes. Additional projectors were added to show planets and other celestial objects. State-of the-art digital projectors are used nowadays for the same purpose.